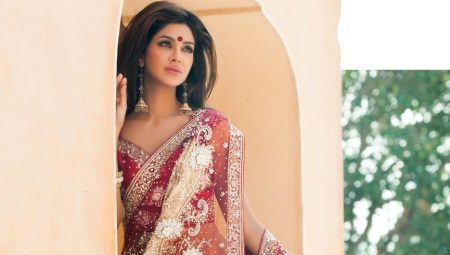 On the pages of magazines and websites, you probably have often seen Indian beauties in bright dresses, trimmed with precious stones and embroidered patterns. The cloth in which they are dressed is called a sari.

Sari is a traditional dress for women living in India. Appearing many centuries ago, this outfit was made from a long piece of canvas in the form of a rectangle. The women wrapped themselves in such a canvas, draping it to emphasize the curves of the figure and to hide possible flaws.

Centuries later, sarees are still popular. These are casual and elegant clothes of Indian women, as well as the original outfit of women in other countries. With the help of saris, beauties can demonstrate their femininity, elegance and grace.

The product is a canvas without seams with a length of 5-9 meters and a width of about 1 meter. Under it, a woman puts on a skirt, which is slightly shorter than a sari, as well as a blouse, which is called a choli. The blouse is often the same color as the skirt and sari, although if the sari has a uniform color, the finish of the blouse may be different.

With the advent of the sari in the wardrobe of women in India are associated with many legends. According to one of them, such a garment was created on a magic machine by a weaver, who dreamed of an ideal woman. He connected in the canvas all the qualities that should be in such a beauty, having received incredibly beautiful and long clothes.

Another legend connects the occurrence of a sari with King Pandav, who lost his fortune and his own family in gambling. The king's last loss was his spouse. Enemies wanted to achieve its exposure, wanting to disgrace the woman, but failed to unwind the clothes. Krishna protected the pandava consort by dressing her in a sari.

Having carefully considered the sari fabric, its colors, drapery and ornament, you can learn a lot about the girl on whom you see such a robe. Sarees are made mostly of silk, chiffon or cotton. The quality of the material indicates the wealth of the owner of the sari.

In the manufacture of Indian saris involved only men. One outfit is produced for a long time (about 6 months). Sari can not be called a cheap outfit, but such a thing serves a very long period and is often passed on to descendants.

At first glance, most sarees are similar, but this is not the case. Each outfit is unique, and there are more than a dozen ways to drape them.

The famous actress from India has repeatedly appeared on the red carpet and other important events in luxurious saris.

In 2012, the Bollywood star appeared at a charity reception in a designer light sari with golden embroidery, and in 2013 her golden sari at the Cannes dinner looked amazing. The actress complemented this chic outfit with a brilliant clutch and gold jewelry.

Although the red color is not very suitable for ceremonial acting, as it merges with the color of the track, but on Aishwarya, Paradise sari in red tones look amazing. The actress has repeatedly put on gorgeous sarees of this color on film premieres and charity events.

In addition, Aishwarya often chooses tender transparent sarees. In 2006, the actress created a spectacular image using a green sari decorated with white embroidery. To him a beauty picked up a clutch shell and long earrings. In 2011, Aishwarya’s outfit was pale pink, and its decoration consisted of beads and silver lace.

The sari in which the girl is getting married is very beautiful and refined. Products are decorated with beads, silver or gold embroidery, rhinestones and other attractive decor.

The choice of fabric, pattern and drapery affects the region of residence of the bride, the welfare of her family and other nuances. For example, in the northern regions of India, brides dress in a red sari, in the east - in a yellow dress, in Maharashtra - in a green sari, and in Assam - in a snow-white.

The most expensive sari in the world

In the Guinness Book of Records in 2008, they recorded the most luxurious and expensive sari. The product is estimated at 100 thousand dollars (about 4 million rupees). In the manufacture of such a sari 30 weavers participated. They manually worked on the outfit for about 7 months, creating a truly incredible attire.

The saris were embroidered with silver, platinum and gold, and then decorated with diamonds, sapphires, rubies, topazes, corals, emeralds and other precious stones.

The value of the product is not only in such a decoration, but also in the drawings on the sari. The canvas was decorated with 11 paintings by a famous artist from India. The weight of this most expensive sari was about 8 kilograms.

Polo dress is the perfect solution for outdoor activities.

What dresses are suitable for the color "Summer"?

What to wear with a sheath dress?

What to wear with a long dress?
Information provided for reference purposes. Do not self-medicate. For health, always consult a specialist.