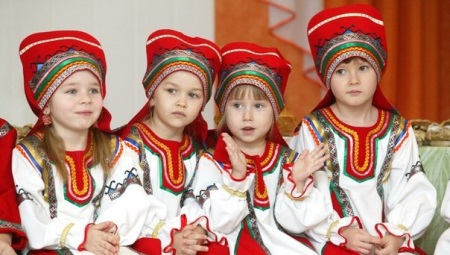 Mordva is one of the Finno-Ugric ethnic groups that traditionally lived in central Russia and the Volga region. The history of this nation left its mark on all walks of life, and clothing was no exception.

The Mordovian national costume appeared at the dawn of the development of this nationality among the peasant population, and was endowed with some characteristic features, such as specific cuts, special fabrics, specially selected decorations.

As a rule, Mordovian craftsmen made fabrics for tailoring on their own. For shirts, they wove a strong, dense linen; for outerwear they made cloths and woolen fabrics. Despite the fact that the national dress was divided into two types characteristic of two ethnic groups — Erzi and Moksha — she had many unifying features.

It is worth noting that due to the fact that the costume was created by the peasant estate, it is very comfortable in everyday life. All parts had a certain functionality. And the parts that served as decoration could be removed or dressed, depending on the situation.

Mordovian costume is incredibly beautiful due to the large number of additional elements, rich embroidery. Considering the various options for finishing, do not cease to be surprised and admire the imagination of masters, their harmoniously developed taste.

This is one of the few types of national clothes that a woman could not fully wear herself, but always resorted to the help of craftswomen. Sometimes the vestment process reached two hours!

The outfit of women Moksha had more color and multicolor, compared with Erzya.

The main part of the female costume is a panar (shirt), made of white linen, decorated with hand-embroidered. By the nature of embroidery, ornament, color, it was possible to easily identify the woman’s belonging to a particular ethnic group. The shirt had no collar and was very much like a tunic. This part of the costume was in both ethnic groups: Erzi and Moksha.

The Moksha woman’s shirt was girded with a special belt - frame. They decorated it with fluffy tassels. Moksha’s shirt was usually shorter than Erzi’s, so they hooked their pants — poksty.

Instead of a frame, Erzya used a complex decoration like a belt - pulay. By the way the pulay was decorated, it was possible to find out about the wealth of a woman, about her belonging to a certain genus. Rich Mordovian women lavishly decorated the belt with shells, beads, sewed beads, coins, sequins. As a result, the weight of the belt could reach 6 kilograms.

An interesting fact is that every Erzya girl had to make such a belt to her majority. And then throughout his life he was her integral companion. Mordovian woman was obliged to appear among men only with a pool.

There were two types of Pula jewelry. The right side was decorated with embroidery. Then, almost to the knees, a fringe was sewn, most often black, but on holidays they replaced it with blue or green.

From above, women wore a dress like a sundress or a kafton krd.

Also often worn long, almost to the knees sleeveless black, which had numerous folds on the back.

Outerwear Mordovians made of canvas and decorated with embroidery, ribbons. At Erzya it was called Rutsya and was used only in solemn occasions. Moksha wore outerwear (muskas) everyday.

Great value in folk costume was given to decorations. Thanks to the decorations, a woman could express her mood, emphasize her status. What was the feature of the jewelry?

Headgear Mordovians differed from married and unmarried women. The girls used a narrow bandage of covered with embroidered cloth and beaded cardboard. Married women had different hats. The main rule is that the hat should have completely hidden the hair of a woman.

Mordovian men in many ways had clothes similar to Russian men. Hemp shirt (panar) and pants (ponks) were the basis of the Mordovian costume. For solemn occasions, they wore a more elegant shirt of fine linen. Panar was never tucked into his pants, but worn over a ponx, girded with a belt-sash.

Kushaku attached great importance. It was made of cowhide, and as an ornament, a buckle made of iron, bronze or silver was used. The buckle could be ring-shaped or solid with a special shield for attaching to the belt. Belt decoration paid special attention. Stones, intricate patterns, metal inserts were an integral part of the Mordovian man’s sash.

The belt also served to attach weapons or other equipment.

In the summer, men complemented their suit with another white shirt. Moksha her called muskas, and Erzya - rutsya. In autumn and spring, their clothes were supplemented with a woolen coat with pleats at the back at the waist. Chapan was also in use - a swinging caftan with a wide scent and long sleeves. In winter, she wore sheepskin coats of great length.

Men used felt hats with short brim as a hat. Dried hats with time replaced the traditional cap. In the summer, they rescued themselves from the sun with cotton caps, and in winter they warmed themselves with a hat with earflaps.

Both women and men were shod in sandals. The best material was elm or linden. In solemn occasions, the Mordovians used calf or cowhide leather boots.The boots had a pointed-toed shape and a folded boot. Like the Russians, the Mordvinians used felt felt boots in winter.

Before you put on your shoes, your legs were wrapped in a footcloth. Usually there were two pairs: the upper calves and the blue ones for the feet. In the cold season on top of the bastards often used cloth onouch. Smooth and thick legs wrapped in onuchi spoke about the good taste of the hostess.

Mordovian children's costume was not much different from an adult. Only in the version for the girl had much less layers and decorations.

Currently, the Mordovian national costume can be found quite rarely. In everyday life, they no longer use it. Some elements can be found in the villages among the elderly. Complete sets with all possible decorations are presented only in houses of folk art or local lore museums in Mordovia, reminding the modern generation of the skill of the ancient craftswomen.