What is unusual Russian sundress? 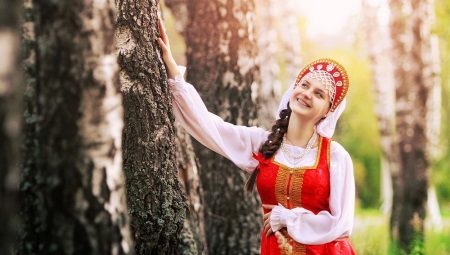 Traditional folk clothes have any people. For Russian women, such a dress is a shirt with a sundress. At the same time with the increasing interest in the ethno-style and history of their country, Russian sarafans today became the object of attention of fashion designers. Let's learn more about such clothes and their use in the past and in modern wardrobe.

The traditional dress is distinguished by a direct free cut. Greater freedom of movement in such clothes provided inserts between the details of the product. The contour of the Russian sundress can be called smooth and very soft. This was especially noticeable in motion.

In addition, the characteristic features of the sundress are:

Until the 16th century, a long dress for men was called a sundress, and only later this name was transferred to women's clothing, which was either worn over the head or buttoned in front.

Since the 18th century, the Russian sundress has changed, which is associated with the reforms of Peter I, introducing a European-style costume into Russian society. Sundresses continued to wear only burghers, merchants and peasants.

Such traditional clothes lasted the longest among the peasants for the longest time, so it was the peasant version of the sundress that concentrated in itself all the typical features of this element of the Russian costume.

Who is going to?

In a Russian sundress, a woman of any body size and any age will look attractive and original. Due to the free cut such clothes do not constrain movements and completely hide any flaws in the figure.

Sundresses in Russian folk costume were represented by the following types:

The main and derived types of Russian sarafans are presented in the following figure.

The characteristic features of the Russian women's costume are the multicolor and peculiar ornament. Favorite color for sundresses was red. That was the color of wedding sundresses.

Also in the color of the dress there were shades of blue, brown, black, orange, brown and yellow. Older women wore more often a blue or black sundress.

Designers now quite often use the Russian folk costume as a creative basis for their collections. They add elements of the Russian sundress to modern clothes.

Traditional sundresses are also gaining popularity. They are bought for thematic events, children's matinees or festivals.

Nowadays, Russian sarafans respond to constructive forms that were used for sewing such clothing in the past. Modern costumes trimmed with folk embroidery, presented in different quantities. It can only serve as an accent and an interesting decor, and can richly decorate a product.

In the past, the dress was worn with a long shirt, which was most often white. Now, under the sundress, they also wear mainly a shirt with long sleeves, decorated with embroidery, but sometimes it is replaced with a white blouse. In winter, a Russian dress is worn with a fur coat or a warmer jacket.

Summer models of the Russian sundress are worn with wicker sandals. In cool weather, boots are ideal for this.

All jewelry and other accessories are selected taking into account the event in connection with which the Russian sundress is worn.

Both short and long beads, bright metal or plastic bracelets and earrings, ribbons, as well as knitted bags made in ethnic style are suitable for such clothes. A stylish addition to the Russian sarafan is a lace kokoshnik.

Dress with a smell decorate any shape!

What to wear with a long dress?

What is wearing a shirt dress?

Dress-shirt - the choice in favor of convenience and practicality

Dress with a semi-sun skirt - coquettish notes in the image

Flounced dress is a playful and romantic look.
Information provided for reference purposes. Do not self-medicate. For health, always consult a specialist.